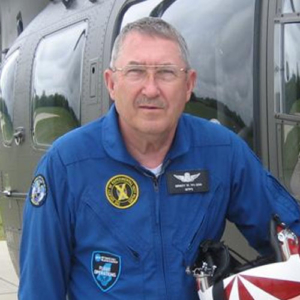 Grady was born and grew up in the rural community of Enid, MS.  He received a BS in chemical engineering and Army Reserve commission from Mississippi State Univ. (MSU) in 1964.  He attended fixed wing training and served two tours in Vietnam flying more than 1500 hours of classified intelligence missions in the RU-6A (Beaver), RU-8D (Queen Air), and the OV-1 (Mohawk).

He returned to MSU in 1972 and received both a BS and MS in aeronautical engineering.  He attended rotary wing qualification in 1974 and the US Navy Test Pilot School (USNTPS) in 1977, where he graduated with honors and served as Commander of Class 73. Assigned to the Army Aviation Engineering Flight Test Activity (AEFA), he served as Director of Flight Test and flew engineering tests on the OV-1D, CH-47C&D and icing tests on the UH-1 and Bell 214 helicopters.

Further assigned to NASA at Moffett Field, CA he became one of few Army Aviators to be qualified in the C-141, C-130, and LR-24 aircraft and was project pilot for the XV-15 Tilt-Rotor during performance, HQ and aeroelastics evaluations. During this period he completed course requirements for a Doctorate in aeronautical engineering at Stanford University.

After serving 23 years, he retired from the Army in 1987, and became chief of Stability and Control for McDonnell Douglas Helicopters.  He returned to flying with Boeing Helicopters in 1990 where he flew V-22 Osprey tests to include aeroelastics, performance, handling qualities and control law optimization.  He was in command of the infamous Osprey crash that the media has propagated since June 1991.

In 1993, he returned to MSU as the test pilot for the MSU/Hondajet project.  He planned and flew the entire certification-equivalent program on this 8000lb, twin-engine jet R&D aircraft from first flight through flutter and high AOA.

He is a life member and Fellow in the Society of Experimental Test Pilots (SETP) and a Fellow of the Royal Aeronautical Society (FRAeS).  He serves as an adjunct instructor in fixed and rotary wing aircraft at the National Test Pilot School (NTPS), and as a production test pilot for the EC-145 and AS-350 with Eurocopter USA.  He has over 8500 hours in 85 different aircraft including jets, heavy cargo, single and multi-engine fixed and rotary wing, and tilt-rotors. He is considered a “triple-threat” in the flight test community having conducted experimental flight tests in fixed-wing, rotary-wing and tilt-rotors.